When working with Sony camera’s capable of recording using slog gamma, 3D LUTs can be a great way to get a quick grade in post or even be used as a base to start grading as I have done plenty of times. For shooting I sometimes even bake in LC709A or 709(800) directly into the footage for quicker turn around work where no grading will be required (or is desired).

But what happens if  you rate the camera ISO lower thereby intentionally over-exposing your footage and then bring it in post and try to use stock LUTs? This will surely destroy your image and likely cause some horrible clipping. The trick is to adjust the exposure of your footage before the 3D LUT – but with certain NLE software this might not be possible, as adding the LUT goes directly on the footage and any exposure tools take place AFTER the LUT is added. This is a problem, but not a problem if you use software such as DaVinci Resolve or even Adobe Premiere which allows you to chain your controls in a specific sequence.

A solution to this is to create exposure compensated 3D LUTs by taking your base 3D LUT, shifting it and then creating a new 3D LUT from it. I use DaVinci Resolve to do this as it is quite an easy process once you get the hang of it. Another tool you can try that exists online is Ben Turley’s 3D LUT Calc – but the GUI may overwhelm you if you are not entirely sure what to select or not select.

Thankfully I have created a few of these exposure compensation LUTs for you to download FREE!

These LUTs only for slog3/sgamut3.cine footage:

But wait there is more…

As a bonus I’ve also included a sample 3D LUT from my ‘Super Magenta Killer 3D LUT Pack’ – the entire pack contains 4 3D LUTs in total but here you’ll get one of them to try out which reduces magenta hue found in some footage from some Sony cameras and does a mild skin tone boost! For people who need it, many have been very happy with it. 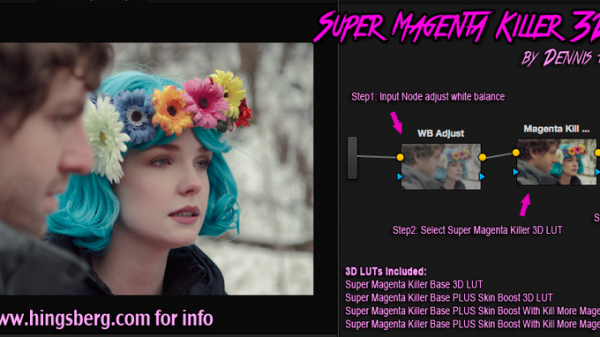